A last minute cancellation on Wednesday made it possible for me to be asked if I was free to join September 2012’s Philofaxy meet up in London on the Saturday. A few checks of the Filofax and finances later and I said I could go and the arrangements were then made for the trip to London.

The plan was to get an early night in Friday night ready for Saturday’s trip but that didn’t happen and when I finally did get to bed I just couldn’t sleep! By the time I got to sleep I only had a few hours before I had to wake up and get ready to head to the station to get me to London in time to meet everyone.

So I put some music on and had a dance and sing to wake me up, well that and some coffee! On my whiteboard above my bed I had some reminders for the day:

Like I could really forget what was happening! Hehe!

When I got to the station I stood waiting in the fresh morning sun for my train to arrive, it arrived on time so I got on and found myself a seat.

When I arrived in London I had a pit stop in Costa Coffee for breakfast before heading to the Underground and making my way to London Bridge tube station.

When I got to London Bridge tube station I walked up the road to London Bridge itself and took a couple of pictures using my iPhone, for the second picture I used the new panorama feature that updated with iOS6.

As I got a bit snap happy on the way to the Tate Modern, I will do a separate post with those images. Now lets skip to when we met up!

I was stood at the Riverside entrance to the Tate for what seemed like forever, but I was early so it was OK. I then decided I wasn’t where I should be meeting everyone so went inside to see if anyone was around. I had a quick look around the shop before asking a lovely and very helpful lady at the information desk who pointed me in the right direction. So I walked through the Tate entrance floor to the other entrance, asked in the café if anyone was there yet but they weren’t so I went to walk outside in the hope I might locate them (nearly walking straight into the glass wall of the building as I wasn’t sure which bit opened for the electric door!). They were stood in a group and I thought there’s about enough people stood there, that must be my group, and it was, I recognised Tracy first then saw Steve!

We waited for a few more people to arrive and then headed on into the café and sat down. We ordered drinks then chatted whilst supposedly looking through the menu to decide what we were going to have to eat. Eventually we stopped chatting for long enough to quickly view the menu and give our order to the waiter. Some of us already have our Filofax out and are showing each other the contents! Our food arrived and we were all chatting between mouthfuls, I was drooling, metaphorically speaking of course, over how yummy the food was and also aver some rather nice Filofax! 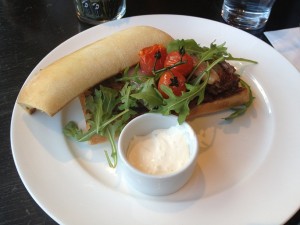 Most of us on the table I was sat at had finished eating, so we had started to move around and talk more, Anita asked if we all want to be included in her surprise draw then went back to her seat. Steve was up taking pictures, luckily I had finished eating or there would have been trouble!!!

We carry on talking and the next thing I know,  Anita has rushed over to my end of the table and hands me a bright blue personal sized Metropol Filofax. I look at her puzzled and she tells me that it was my name that came out of the hat so the Metropol Filofax was now mine! I was so surprised! Here it is looking very blue and lovely with my Holborn and Malden in the background:

I will be doing another post about it so will not say more than that here!

Everyone had their Filofax out, swapping with others so see what they had inside theirs, what they felt like and smelt like – my Holborn was enjoying itself whilst Jess was looking through, she started stroking the back inside pocket as it is really soft leather. Jess had a doorstop of a Snakeskin Domino – I don’t think I have ever seen such a full Filofax! She had week on one pages and page a day pages that were full of writing and lines through completed work. It was definitely a well used and very useful organiser. I was somewhat envious really, not having a job at present I had none of my lesson planning in my Filofax so it looked really rather empty and boring in comparison.

Andy from City Organiser had brought with him his wife’s Dodopad from 1980 – it was even more stuffed than Jess’s Domino and it was even in a Dodopad envelope to keep it all together! As Lord Dodo was with us it was quite a centrepiece! It was FULL of writing and letters that had been stuck in and other items that were obviously really important and personal. None of us wanted to be rude so to speak and read it, a diary like that could contain a lot of personal thoughts and feelings, but one can only begin to imagine what stories it could tell!

Several more people switched seats and I looked through lots of lovely and colourful Filofax, some people seem to be more pretty and colourful with the contents of their Filofax and others are more straight forward and just have one or 2 colours for their tasks and appointments. I felt a little better about my Holborn as it at least has coloured paper for the pages and coloured pen rather than just black and white – not that there’s anything wrong with just having black and white obviously but personally I was a little worried my Filofax was not colourful enough!

This sight really made me laugh so I had to take a picture of it to capture the madness, my table was covered in Filofax and at this precise moment of the four of us that were sat at it, three of us were on our phones texting or updating a status or something, so I used my iPhone to take a picture!

It was finally time to make the walk to City Organiser!

And what a lovely day it was for a walk around London too, blue skies and sunshine, a slight autumnal chill in the air but a very lovely day.

We were all very excited to have arrived, Andy let us put our bags and coats down so we could browse easily as there were so many people in the shop. Then the fun began! We all went straight for the Filofax display, ignoring all the other items in the shop! We did look through the rest sort of, but only later once we had a thought gap between Filofax purchasing options!

We were also allowed to visit the elusive office/stock room – and boy what a sight that was! I had never seen so many Filofax in one place ever.

We all very much enjoyed our trip to City Organiser and I would like to thank Andy for joining us for the afternoon and letting us loose in City Organiser – he must have needed a large cup of tea after we finally left.

At this point some of us left to go home, others of us decided to hit the stationery shops of London for some serious wallet bashing. So a group of us girlie’s went to Artbox, Muji, Stanfords and Paperchase before heading back to meet up with the boys for food. We had so much fun wandering around all these shops and chatting along the way.

One of the highlights of this part of the day has to be when we came out of Muji to wait for two of our group to purchase some items as it was so hot and packed inside. We were standing in a small circle and Anita was putting her new tick sheet pad in her Filofax, she suddenly decided to see if it would fit in the back notepad pocket of her personal sized Purple Malden, we all watched it slide in and fit perfectly, and, as Anita let out a triumphant “Yes!” the rest of us all said “Ahhhh!” at the same time and sounded like a complete bunch of tourists! It was really funny and also really great to be able to geek out about stationery and Filofax and all understand and appreciate how awesome it was that the notepad fitted perfectly into the notepad slot. We were all finally able to talk about some of our passions face to face with other people and not get smirked at or joked about or have funny faces made.

When we met the boys for food, the girlie group had shrunk some more, so there was now in total seven of us that went to Vapiano for some truly delicious food. If you ever get the chance to go to a Vapiano’s take it – they serve up freshly cooked food, they literally cooked my pasta in front of me and the pizza is prepared in front of you then cooked and you are given a buzzing light thing that goes off when your food is ready for you to collect. The deserts are equally good and I had a hard time choosing from the menu, but that changed when I went up to the counter and saw the cheesecake (despite the fact I really shouldn’t of eaten it I ordered it anyway and enjoyed every single mouthful!) but I would have quite happily eaten most of the deserts on the menu and indeed most of the food on the menu in my pre-lactose intolerance days (which I hope I will get back really soon – please?!?).

To sum up, I had one of the most amazing days out with a fantastic bunch of like minded people, giggling and talking about a mutually favoured topic or two. I would recommend to anyone to join in with the next one to happen near-ish to you, where ever you are in the World. Before Saturday I had not met any of my fellow Philofaxers in real life (well apart from one but as I’m the one that got her into Philofaxy I don’t think that counts!) and I was a little nervous to meet a bunch of people I had only spoken to online. But we were meeting in daylight in a public place and no one was on their own, I had also made sure people knew where I would be. After about 10 minutes of talking I was totally at ease and knew I had met a great bunch of people that I hope to met up with again for more Filofax mayhem!

Thanks to Steve for organising a Philofaxy meet up and thank you to everyone that went on Saturday for a really great day out, I totally enjoyed myself and can’t wait for the next time I can join you all!

5 Thoughts to “Philofaxy September 2012 Meet Up”