Well I mentioned in my previous post that I had recently purchased a new Lamy AL-star fountain pen and I was having issues with writing so far using it. I have been looking online about how to hold a fountain pen properly in case I still haven’t mastered the whole pen holding technique (I only started holding my pen with 1 finger instead of 2 whilst I was in the later years of being at uni and it improved my handwriting and helped get rid of a lot of wrist ache).
It seems I’m holding it basically right although I twist the nib slightly so that the base of the nib is not on the paper as it should be. The left side of the nib is slightly raised, thus stopping the flow of the ink (or at least making it inconsistent). You can get oblique nibs that are either right foot oblique or left foot oblique. The more common are the left foot variety – and guess what? Yes, I need the right foot variety it would seem!

During my research on nibs, I have discovered that Parker Pen nibs (at least for the Vector fountain pens) are suitable for right or left handed people and they only do a small selection of nibs. I am tempted to try a fine nib rather than the medium I have been using as my handwriting looks quite chunky in my Vector compared to the AL-star (also a medium though!) so perhaps it would work better in a finer nib?

Part of the issue with the AL-star so far could also be that I didn’t squeeze the ink through enough to start with, having done it now it seems to be better. Although several websites said you don’t “break-in” a nib, I disagree. I think it gets some amount of pressure on it how you normally use it to write and it then moves (no matter how slightly) to accommodate this pressure/angle/style. If this doesn’t actually happen then you clearly just get used to holding the pen in the optimum position for writing. I would say in my head it is a combination of the two.

There are clear differences in the Vector and AL-star nibs as well. The Vector is rounded and the AL-star is far more angular, the nib is also longer in length than the Vector.

The other issue I have with the AL-star is the grip – it has two angular sides to it and a smooth v shaped underside rather than being circular all round. This is not making it comfortable to hold at present as the angular sides are not in the right place for me. My fore finger is ending up sitting on the very top part of the grip – where the 2 angular side meet at the top of the grip. This also may just take some getting used to.

I am liking the turquoise ink, think I may have to see about some purple ink also if I get on with the AL-star after a bit of practice as I mark in purple, but I might just keep separate pens for different coloured inks as it would be nice to have a variety of options colour wise!

Will keep practicing with the AL-star and will look for a fine nib for my Vector, may purchase one at the end of the month. 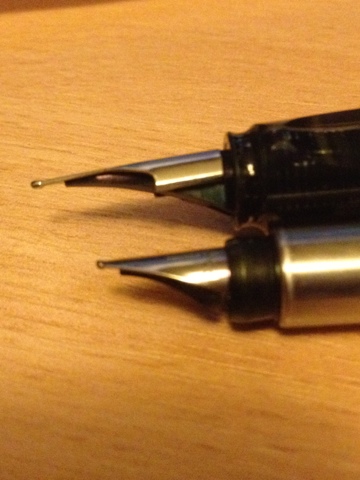 One Thought to “New Fountain Pen”